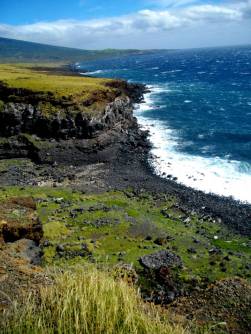 “Don’t go any further,” she shouts into the wind.  The man holds his hand against the baseball cap on his head and smiles, thrusts his other arm out into the wind as if he might make himself into a sail of some sort, lift up off the ground, fly away from her.   He motions for her to come. He is having fun. She stands where she is and watches the wind ripple the grasses that cover the hill sides, green as far as she can see except where the black lava rock intrudes. She imagines how it must have flowed, long ago, how once there was nothing here but water.

“What are you scared of?”  he shouts back at her.

They are on vacation and drive a narrow road that climbs above the waves.  It was too windy on their beach to swim so they drive.  They stop here to watch the waves hit the jagged rocks.   From atop she admires the foaming white spray against the black.  She should trust him.  She should. And move into the wind.  It is silly to think he would fly away from her, fall off the edge. She wants to trust.  That is what she thinks she should do.  But she stands still, or tries.  The wind pushes her about. The boy, their son, is hesitant too and stays near the rental car.

She thinks of the sea turtles.  How graceful they are when they swim, how confident.   She thinks of the colored fish, flashing in the sunlight, the coral, they way the two of them, she and the man, take turns diving between the canyons of coral. Pointing and then rising and then diving down again.   They seem to understand each other so well – there should be nothing to fear.  Their boy floats on the surface between them, humming to himself, trying to join them in the diving but is stopped by the life jacket she makes him wear.  Now the boy goes to sit in the car, hot and hungry and bothered by the wind.

They had  stopped at a small store just past the place where the paniolos crossed the road with their cattle and horses – the place where she resists taking pictures like a tourist.   At the store the boy drinks lilikoi soda and eats chips.  The man looks at the vintage cameras collected and displayed on the dusty shelves around the store.  They stand on the porch and look out on the road,  listening to the wooden porch creak, the stairs,  as they walk back down to the car.

He should know it’s dangerous, she thinks, even for him, as surefooted as he is, goat like and fit and fearless.  It’s a delicate thing you know?  This one foot in front of the other – whether here or there – how much and how far and what is too far before it’s too late to circle back to the place you were, before you lose sight, or balance or some such thing.

“I won’t go any further,” he says, as if to reassure, but he’s already at the edge.   She thinks of the street her parents warned her about as a child.  The one with the fast cars. She thinks about the ride they took out onto the ocean.   How they jumped off the boat at the reef’s end.   She remembers how she looked up to see the boy floating above, his arms and legs all akimbo, the life vest just another blur of blue.  Below her the water gave way to endless black, the sunlight disappearing somewhere in the deep.

After the store was a small white church, all picturesque on its windswept hillside, all alone in

the green with the waves breaking below.    And a graveyard too.   They  stop and take pictures, look into the tall windows, spy their reflections amid the church pews.  The woman shushes the boy as he runs around, excited and chattering,   between the white headstones.

She hears gears shift out on the roadway then brakes.   A boy and two girls climb out of a car.  They smile.  The girls have long hair that is taken up by the wind and blown across their faces.  They brush the hair away and yelp and ran out toward the edge.  They take pictures of each other as if they’re falling over the edge, as if they’re being blown away, as if that would be fun.  Then they run back to their car, jump in and are gone.

He motions to her again, standing there on the cliff edge.  Smiling.  She steps forward gingerly, tentatively, walks slowly to the edge, buffeted by wind.  She goes to the edge to see what the fuss is all about, what the man sees, the girls from the car.  He is standing there, with his hand on his cap still, and offers his hand.  She inches close to the edge and looks.  She sees there is a fall but no abyss. It is a ravine full of tall grass and smashed rusted cars.   Scattered here and there is debris washed in by the waves.

The ride back to the hotel is long.   The hillsides blazing bright  until sunset.  The road is curvy and rough and cars come suddenly but not often.   They, the man and the woman and the boy, snake along and above the water, the water blue and white with foam from crashing on the rocky shore.  It is a universe of water out there, she thinks, blue as far as she can see.   She will wake late at night and think of the blue.

When morning comes to them in their room they wander out to the beach, the water calm and quiet now, and see tracks in the sand.  Small delicate tracks. Where they came from or where they go or what made them is unknown.  They  follow the tracks a short distance before going   to the water where they  put on snorkel gear, dive into the waves, and swim.  They look for turtles and fish.  They see a big sea turtle and follow, feeling graceful and perfect. They follow the turtle until it disappears in the deep, swimming out to sea.  Then they go look for another and another and another until they tire.

He comes in late that night and takes the glasses off her nose, turns off the light.  When they wake the next morning, it is later than it should be.  They drive to the airport through blazing hot light –  hurriedly and quietly, and return the car.   They wait patiently to board the plane, sitting  on the tarmac till night falls and then  lift up over the water to cross the ocean, follow the coast lined with tiny sparks of light to land in a dark quiet town, their own strange land, their home.

The trees are  frosty,  the roads icy as they drive home  to a cold house.  They  crawl in bed, exhausted.  Before falling asleep she wonders what it is he needs, the man.  What he craves.  Why he wanders so near the edge.  She should ask, she thinks, but doesn’t.  She wakes instead, in the dark, thinking of the blue, of the edges, of the places the light disappears.  She hears wind rattling the branches outside the window.   She listens to the man breathing, can hear his slow, deep breathes.   She hears the boy in his room, toss and rustle.  What is she afraid of ?

She thinks of the blue, the edge, the white church, and the paniolos on their horses, disappearing into the green.  It’s a delicate thing you know, to be safe.   Tell me we’re safe, she thinks.  Tell me we’ve nothing to fear.