hen they wake in the morning the fire has died and frost covers the window panes. New snow  blankets the ground outside.  The woman and her husband and the boy push themselves out of bed. The man makes a fire while she boils water for breakfast.  They drink coffee and hot chocolate, wrapping their hands around the mugs to keep them warm, getting as close to the wood stove as they can. Then oatmeal and afterwards they gather up lunch and some extra clothes and put them all in a pack. Outside the air glitters, not snow or rain, but something more graceful and elusive falls from the sky.  They are eager to get out into it and feel strong and confident and proud of the way the cold doesn’t seem too bothersome.

They decide to go to the ridge above the cabin, a place with a view,  where they think they will lunch in the sun.  It doesn’t seem far, this ridge.  Just at the wilderness boundary. So uphill they snowshoe.  Overhead is a deep blue sky.  Though they are new to the place, a cabin they rented for the winter break, they leave their maps on the table.  The way to go seems obvious, the snowshoe trail  marked with blue triangles and the snow packed down by others that have come before.

As they go the boy points up at the tops of trees, at the ravens squawking.  He points at the ridge that seems to get ever further away the longer they walk.    They see the sun in the trees,   sense the day warming as sweat runs in tiny rivulets down their backs and beads up on their foreheads.  The boy takes off his hat and gives it to the mother, unzips his jacket.

When they reach the ridge it is afternoon.  Deep, unblemished snow covers the ridge.  The tracks they’ve followed end but they see blue triangles tacked to trees here and there.  They can’t resist the deep snow and bounce through the newness of it, each of them taking a different path, each a little saddened to disturb the surface.   The boy goes to the edge of the ridge, to a point where a rock cliff protrudes from the snow and the mother and father come to the edge too and stand with the boy.     The sun makes everything glitter and they spend nearly an hour throwing   snow balls over the edge,   watching them roll and gather speed or stop mid slope,  watch how the balls leave little tracks in the snow, like mice or rabbits might.

Then the mother pulls  lunch out of the pack and they sit to eat.  The sun seems warm and they linger, eating slowly and delicately,  talking quietly about this or that, all alone on the ridge, surrounded by snow and trees and ravens.

After lunch they continue along the ridge instead of going back the way they came like they had planned.   It is so inviting with the perfect snow and openness between the trees and the ridge and the slopes still in the sun as far as they can see.   They spot blue triangles here and there and are sure the map said something about a trail going back to the cabin this way.

They weave their way down the ridge, 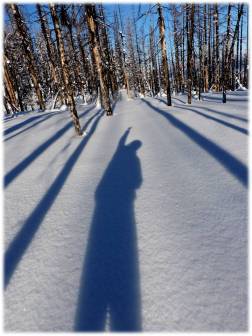 exalting at the beauty of it, sorry for those who come after to find their tracks.   They find a stand of blackened trunks where a forest fire burnt through and they stop to take pictures of themselves and the trees and ridge line against the sun, the trees casting long lines on the white.   The boy clamors to use the camera too and the man sets a tripod up so the boy can take photos.   Then they snowshoe over to look into the valley, look across the wide to see the good long while of the day, the end of it almost, out there somewhere beyond the horizon.

Then the blue triangles  disappear.  They continue down still.  Maybe the triangles  burnt up, they think,  and just never were replaced.  The mother points down to where maybe she  sees one but it is just a shadow on a tree trunk.  They decide to go that way anyway, away from the burn.  It seems in the direction of the cabin and they’d rather not go back uphill.  They’re sure they’ll find more triangles.     At first it is easy and beautiful as ever and they spread out through the open of the big trees.  Then the trees narrow and thicken, become smaller, dog hair new growth, as if the place had been logged not so long ago.  The only blue is day light starting to turn to shadow as the sun slips below the ridge.

As the trees crowd closer the wells become harder  to avoid, almost impossible.  Be careful, they say to the boy.   They have told him before about tree wells. About the deep rings of snow that build up around tree trunks. Snow so deep and narrow, that a grown person can fall into the gap between the trunk and tree – unable to climb out without help.  Skiers have been lost, and snowshoers, and sledders.  Gone and no one able to  find them, there in the forest and the millions of trees and the soft, suffocating snow.   Difficult even to  hear shouts.

The man is the first to fall but gets himself out quickly having only sunk to his knees.  Then the boy falls and gets up and out quickly too though snow fills his mittens and falls down his back.     I’m cold, he says,  as they shake the snow out of his mittens and off his clothes and back.

The mother leads then, the trees becoming nearly impenetrable .  They duck down and turn sidewalks sometimes.  What if one of them fell into a deep well?   What if it’s the man?  The mother thinks this.  The man is too heavy for the boy and her to lift out.  What would they do, the boy and her?

They see nothing but green and white about them now, a little sky above.   Their faces get slapped by  pine needles and snow falls off branches and onto their heads.  Twigs poke their cheeks and nearly in the eyes.  The boy whines his hands are cold but the mother is gruff and says to just keep moving.  The mother and father wonder if they should go back the way they came.  When they look up they can tell the sun has fallen completely behind the ridge. It is too late, they say to each other, too late to turn around and go back the way they came.

She tells the boy to zip his jacket, worries she should have told him sooner and his hat?  She exclaims, where is his hat and when did he take it off and why hadn’t she noticed?  She tries to go faster, thinks she sees a better way through the trees, downhill a little.  But then uphill is better and so they go back up, zigzagging through the trees.  The going is slow. The woman thinks she see an opening of sky, a spot where the trees seem to open up so they go there but it is a cliff.  The woman turns to the man and says they can’t go any further this way.   She was hoping for a view, or to see the cabin below them.

It seems they were just lunching in the snow, she thinks, in the sun on the ridge top, laughing. They all turn around and the man leads, away from the cliff, uphill a little more, slowly between small trees and rock and suddenly into an opening.  They are happy for the opening, so relieved they start to run through it, the deep snow is  light and airy and billows up around them.   They feel light as the snow, sure now they will find the way before dark, before the real cold sets in, before stars come out and a chill breeze rises.    In any case they’ll make it back to the cabin.  They imagine the fire they will make,  taste the hot cocoa and dinner.  The mother and father think of the little bit of whiskey left, sitting on the counter.   And after dinner they’ll laugh about it all as they play cards and throw wood in the stove, listen to it roar as they get too hot and pull their sweaters off. Everything will be fine.

Look , the boy shouts, and points up at a tree, the biggest tree at the edge of the meadow.  Spruce, the mother says to the boy, her breath turning white as she speaks.  A magnificent tree, she thinks and they head toward it, and as they go she points up at the ravens.  There are a couple two of them, cawing and flapping their wings as they land on a thick branch, dark against the purpling sky.  The father, up ahead, stops to take a picture and the mother asks isn’t it too dark for that?    He shakes his head no but then stops and points downward, waves his arms.   A creek, he says and waves his arms.  Go around, he says, go around.   The mother asks what did he say  and looks around to see where the boys is and when she turns back to the man, he is gone.  Disappeared.  All she sees is white. The mute trees.  Her breath billowing out into the darkening woods.  Ravens winging  off  into the night.  She listens to the swoosh of their wings,  the echo of their cackles,  until they too are gone.